Working together for a sustainable alpine region

Like EUSALP’s State-Regions governance, the French presidency will work by bringing together the State (Ministry of Territorial Cohesion and Relations with Local Authorities, the National Agency for Territorial Cohesion, and the Alps Massif and
Jura Districts) and the Auvergne-Rhône-Alpes, Bourgogne-Franche-Comté and Provence-Alpes-Côte d'Azur regions, as well as other institutional and associative players in this vast territory.

All of them share the same ambition: to work together for a greener Alpine region and to ensure more sustainable development.

France will exercise its presidency in close consultation with its partners in the European Union Strategy for the Alpine Region (EUSALP), the four other Member States of the European Union (Germany, Austria, Italy, Slovenia), Switzerland, Liechtenstein, the 48 Alpine Regions and the European Commission. With all of these national and local actors, the French presidency will endeavour to contribute to accelerating the ecological transition of the Alpine region, in order to fight against climate change.

The French Presidency is honoured to have Nicolas Plain, scientist and explorer, as its ambassador for the year.

Originally from Grenoble, this 29-year-old scientist and documentary maker roams the area by paraglider.
Equipped with a flying laboratory, he searches for concrete solutions and promotes the practices of actors in the field, to fight against the effects of climate change. The French presidency has entrusted him with the role of EUSALP ambassador, which he will support, throughout 2020, to make its activity better known to citizens.

THE FRENCH PRESIDENCY: A YEAR TO MOVE FROM DIAGNOSIS TO ACTION!

France’s goal for this EUSALP presidency, as part of the European Commission’s “Green New Deal”, is the fight against climate change. How can human damage to this unique natural heritage be corrected? With the support of action groups and all partners, the French presidency will develop its program around seven priority and complementary areas of action. 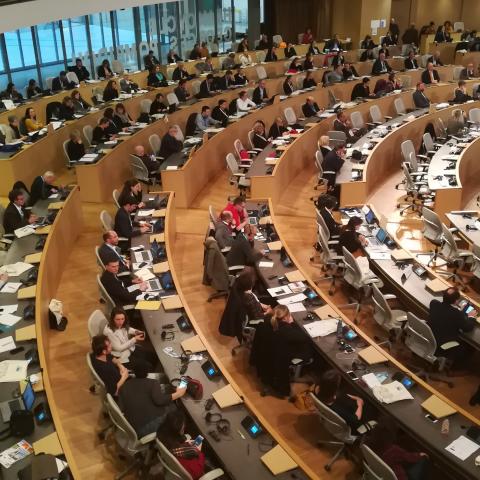 On the occasion of the French presidency of EUSALP, EU Strategy for the Alpine Region, the national meetings of pastoralists and the International Film Festival "Pastoralism and Great Spaces" come together under a common banner to put spotlight on Euro-Alpine pastoralism.

The conference "CLIMATE, RISKS, ENERGIES: Stakes and assets of Alpine territories in post–crisis management" will be held in Chamonix, on September 30th and October 1st, 2020.

Within the events scheduled for the French Presidency of EUSALP, the association ADRETS organizes an event to bring together politicians, project managers, researchers, associations and all those people who are involved or interested in the topic of Smart Villages.